Scorpion Control and How to Get Rid of Scorpions

Scorpions are arachnids, not insects as you would think. They are close relatives to spiders, mites and ticks. There are approximately 1,300 species of scorpions worldwide. They have elongated bodies and a segmented tail that has a stinger on its tip. Scorpions are very common in the Southern and Southwestern United States.

Get Rid Of Scorpion Kit

Most scorpions in the United States are not poisonous, except for two species found in the southwestern states of Arizona, California, New Mexico, and Texas. Even though scorpions are common in deserts, they inhabit many other habitats as well. These different habitats include grasslands and savannahs, deciduous forests, pine forests, rain forests, and caves. Scorpions are nocturnal (they hunt for food at night).

Scorpions may invade structures and crawl under any object that provides protection. Since gaps around doors are a major entryway for these occasional invaders, seal up gaps indoors with weather stripping. Bark Scorpions have been known to climb into the tiniest of cracks. Plug up gaps around wires and pipes. Remove any clutter inside and clean up to eliminate any possible hiding places for scorpions. Since scorpions become active in the early spring, use exclusion methods during the fall and winter months.

Scorpions can not climb on clean glass. Place wide- mouth jars under tables and crib legs, if this poses a problem of potential broken glass, apply petroleum jelly on the legs.

Prune shrubs to expose trunk and ground around the plant

Points of entry into buildings, e.g. siding, windows, doors, pipes and wires, should be sealed.

Use weather stripping around door, windows, and vents.

Be careful in picking up objects during the summer months. Inspect the underside and scrutinize the object. Shake out shoes and clothing vigorously before wearing them. Do not walk barefooted at night. Use a UV light ( causes them to glow ) when moving about at night in scorpion infested areas. Do not swat at scorpions found on your body; brush them off instead. 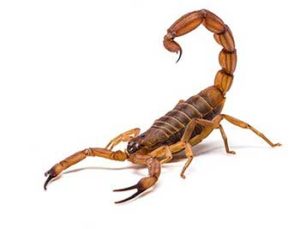 HYGIENE & BUGS R US WILL CUSTOMIZE A DETAILED PEST AND HYGIENE PROGRAM FOR THE ERADICATION OF SCORPIONS ON YOUR PROPERTY.

We have quite a few dangerous and poisonous scorpions in South Africa that come into our homes, yards and buildings. With scorpions, size does not determine how poisonous the scorpion is.

There is no poison that can be applied to keep scorpions out of your home, building or yard for long periods of time. When treating for scorpions you have to do regular pest control and home maintenance to eradicate and keep your scorpion problem under control.

Antivenom may be required 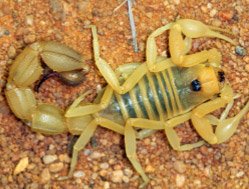 How to Get Rid of Scorpions

Although scorpions are typically found outside, they have been known to invade homes and even cause infestations. To avoid contact with them,

Prevention. Thoroughly clean the inside of the house. Carefully pick up all laundry and debris cluttering the floors. Popular indoor hiding places for scorpions include closets, piles of laundry, attics, bathroom or kitchen cabinets, and crawl spaces. If they get into your home, they are usually found in secluded dry areas such as closets and garages. Clean other rarely used spaces

Think like a scorpion. Know what scorpions like and where they hide. In general, scorpions are drawn to dry areas and their main sources of food are usually small insects and spiders. By keeping your home insect-free, it will make it much less likely that scorpions will be a problem, so general pest control is recommended.

Eliminate hiding places. By controlling scorpions outside the home you can also control them inside your home. Remove debris such as loose rocks, stacks of firewood, boards, piles of leaves, tree bark, trash and other unnecessary things around the home. Scorpions like to keep out of the sun by hiding beneath objects so remove these ideal places to hide. They love these areas not only because they provide harborage but because they can find other pest here that they can eat.

Trim and prune. Keep your lawn mowed short and all shrubbery nicely pruned. Trim trees branches and bushes so they don’t reach the exterior of your home. Overhanging tree branches and overgrown bushes can give scorpions a direct path to the roof 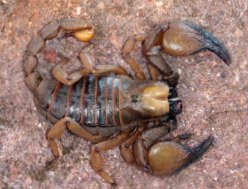 How to Choose the Right Pest Control Services for Your Needs

Pests are searching for food, water, and shelter – just like us! Unfortunately, they don’t pay rent, and very few people want to see a cockroach sharing their home. Pests do not need to be a fact of life. Proper pest control services performed regularly can keep your Henderson home or commercial building free of critters. There are a few key factors which you should keep top of mind when choosing the right pest control services for your needs!

Bugs are beyond gross; they can be dangerous as well. Scorpions, spiders, and rats are only a few of the reasons Henderson pest control services are often called upon. Disease-carrying pests can damage your home, harm pets, and cause illnesses to humans. One reason to choose a local pest control service is that they know exactly what types of vermin are likely to show up. You can’t treat what you don’t know, so finding a Henderson pest control service who is knowledgeable in the regional pests is crucial. Besides that – when you have a problem, you want it dealt with immediately! Be it a single roach crawling across the bathroom tile or a full-blown scorpion infestation, it’s better not to wait. The right pest control service for your needs is the one who can be there immediately; a Henderson company is just down the street!

Going local with pest control services specific to Henderson is a great first step, but not the only one. Choosing the right services for your problems takes a bit more research. Checking to make sure they’re licensed and insured to deal with the particular pest you’re plagued with is the first step in picking an exterminator. They should be able to readily produce paperwork proving their qualifications. If they can’t, or they make you feel uncomfortable for any reason, you should walk away. A giveaway for a company who’s just seeking to take your money and run is if they’re unwilling to provide explanations about their pricing, services, or pesticides used. There’s no shame in needing to double-check their facts, but an outright refusal means you refuse them! Don’t be shy about checking references either. Qualified Henderson pest control services are happy to produce testimonials from pleased customers. Online reviews are a great way to see if the company is the right one for your needs.

A company with positive reviews and the correct accreditation is a great start, but it doesn’t necessarily mean you’ve found the right one for you. Your pest control service should give you individual attention from start to finish. When choosing an exterminator and their subsequent service plan, feel free to ask questions. Are they willing to produce their licenses and insurance cards? Can they explain the various pesticides used? Do they require a contract? They should also be open to hearing your individual needs. Children shouldn’t be exposed to certain materials, so ensure you mention them during the consultation. A qualified Henderson pest control service can deal with any pest while handling your individual needs. No detail is too small, and you know you’ve found the right company when they listen to every word 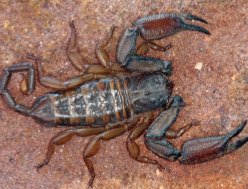 Scorpions are terrifying arachnids that no one wants in, or anywhere near, their homes. They have eight legs and a pair of large claws used to seize prey and defend themselves against predators, but that’s not their only weapon —they possess a segmented tail that often curves back over their bodies and is equipped with a venomous stinger. Scorpions have an unusually long life span and live between three and five years. However, some species live 10 – 15 years.

Scorpions thrive in dry climates and feed on a variety of prey, including insects, spiders, mice and lizards. They use their pincers to capture their victims and sting them with neurotoxic venom to paralyze them. Scorpions can survive months without food if necessary, but require water and a shady area for sustainable habitation.

Because scorpions are venomous and aggressive, you don’t want these guys getting in your house. Unfortunately, scorpions have been known to find clever ways to enter homes. They may first hide around outdoor woodpiles, potted plants and outdoor furniture near your property to avoid the sun, but this can lead to an indoor invasion.

When scorpions move indoors, they can make their way in through torn windows, door screens, vents and openings in the walls. Damaged or exposed weather stripping can also lead to a scorpion infestation. They like to hide out in dark basement dwellings, crawl spaces, bathrooms and garages, and may even roam around kitchen cabinets

If disturbed, scorpions use their stingers and claws to defend themselves against human interactions. Scorpion stings can cause swelling and pain similar to bee stings, and some people may have allergic reactions to scorpion venom that require professional medical treatment.